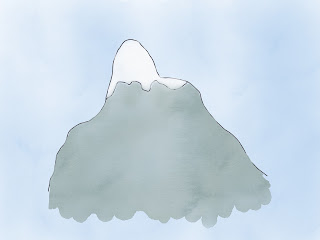 Let's start with the text of the poem itself (not available on The Eldritch Dark):


Up arduous slopes one shall attain, outworn,
The peak he thought supreme, which shall reveal
The loftier heights it served but to conceal.
Thus shall one win what seemed Achievement's bourne,
Crowned by his highest dream, and stand forlorn,
For from that place shall to his eyes appeal
A hitherto unglimpsed, more high Ideal,
On nobler summits, lit by larger morn.

This is the Law.  Upon the Upward Way,
With progress doth the inner sight expand:
The ends we strove to gain but yesterday,
At winning small and insufficient stand,
For from that vantage have our eyes descried
The greater ends the lesser served to hide.


This poem reads like a manifesto for the young Clark Ashton Smith (CAS), who was still a teenager when it was written.  The strongly declarative statement "This is the Law" leaves little room for debate, and it's impressive to see such a young artist articulating a worldview in which ambition is never-ending, each satisfied goal simply birthing new goals  to be attained.

CAS' writing is sometimes criticized for having an overly grand manner, featuring a complex vocabulary woven in archaic poetic forms.  But I like to think of CAS as an ambitious writer, who was not satisfied to churn out the ordinary, with a few exceptions during that phase of his career when he was trying to make a living writing short stories for pulp magazines.

Ambition is a complex thing, and doesn't always lead to positive outcomes.  But in the service of poetry, CAS can hardly be faulted for his artistic ambitions, and this poem seems like a strong statement of intent for the young writer: "With progress doth the inner sight expand."

Posted by Jeff in Bellingham at 6:24 AM