A diversion: Behrends on the poetry 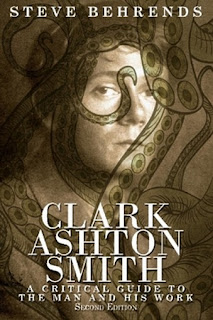 As I go along this journey of reading through the poems of Clark Ashton Smith (CAS), I'll be taking some parallel paths to read what critics and reviewers have had to say about the writer and his work in poetry.

I'm going to focus on commentary that came along after CAS' death, since those folks have had the opportunity to consider the body of work as a whole.

For those interested in reviews that appeared while CAS was still alive, a great place to start is Scott Connors' "The Coming Singer: Early Critical Responses to Clark Ashton Smith" in the journal Dead Reckonings or via Scott's Patreon project.

First up for consideration is Steve Behrends, simply because his was the first critical analysis of CAS' writing that I ever read.  His Clark Ashton Smith: A Critical Guide to the Man and His Work first came out in 1990, but has been re-issued and expanded by the Borgo Press.

Behrends' volume is mostly concerned with CAS' fiction, and the chapter on "Verse" is one of the shortest in the book.  Not surprisingly, the chapter focuses primarily on CAS' most famous poem, "The Hashish-Eater".  Since I won't be reading that particular work until much later in my journey (I'm proceeding more-or-less chronologically), what I can take away from my reading of Behrends is his identification of core themes in CAS' poetry:

Even though Behrends gives a very brief overview of the poems, I think this list of themes is useful and is something that I will be re-visiting as I continue my journey.  I am interested in learning how the poems reflect CAS' personal philosophy, and keeping these central themes in mind can help me with that investigation.
Posted by Jeff in Bellingham at 7:29 AM