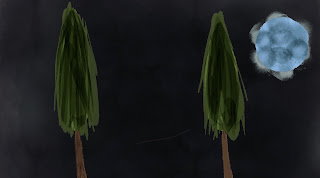 Read "Illusion" at The Eldritch Dark:

This short poem has an almost hallucinogenic quality.  The progression from sunset (in the first line) to evening (the "graveyard-loving moon" in line six) leads us to end on the word "tomb", which adds a dramatic impact.

It's worth noting that in the Hippocampus Press edition of the poems, the last line is rendered:

Or cerements of a riven tomb.

Whereas The Eldritch Dark has:

Or silver cerements on a tomb.

The former seems much more powerful to me, since it creates the image of a violated tomb with the cerements scattered about, suggesting the work of a ghoul, a grave-robber, or something even more terrible.
Posted by Jeff in Bellingham at 5:57 AM