Song of the Necromancer 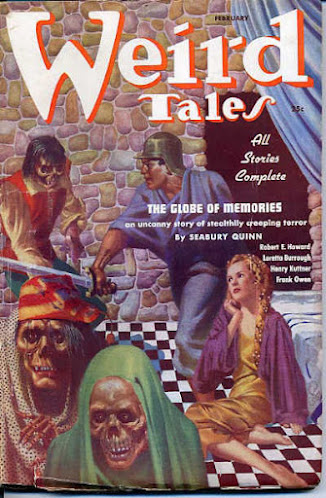 Read "Song of the Necromancer" at The Eldritch Dark:

This poem from Clark Ashton Smith (CAS) was originally published in the February 1937 issue of Weird Tales magazine.

The use of an enclosed ABBBA rhyme scheme lends an interesting pacing to the reading of "Song of the Necromancer", encouraging a strong pause at the end of each of the seven stanzas.  The ideal delivery when read aloud might be described as stately, or perhaps better yet (this is CAS after all!) incantatory.

"Song of the Necromancer" is thematically aligned with much of CAS' earliest poetry, particularly those verses collected in The Star-Treader and Other Poems (1912).  But the technical approach is quite different, as this later poem uses a simpler vocabulary and emphatic rhymes in a more sophisticated way than CAS was wont to do in his youth.  These lines from the second stanza really capture that difference:

In dust upon unwinnowed skies:
But primal dreams have made me wise,
And soon the shattered years shall rise

By combining the use of internal and end rhymes, CAS has created beautiful music in those lines.  This is exemplified by the internal rhyme on the letter "s" in the final line quoted above, which centers on the strong verb "shattered".

Combined with an incantatory aural delivery (as suggested above), the technical construction of the poem directly invokes the subject matter, as the act of recitation causes the reader to "repeat a subtle rune", and become part of the necromancer's endless cycle, where death will never grant any rest.

Posted by Jeff in Bellingham at 6:47 AM