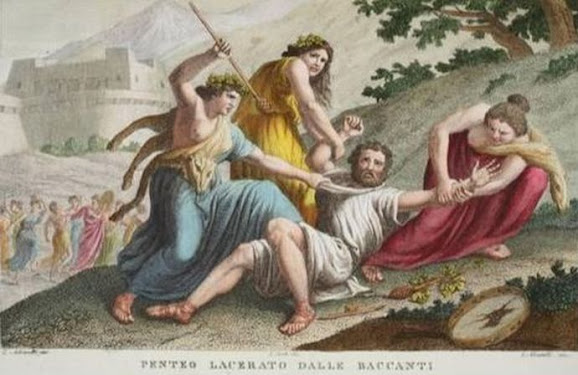 This haiku from Clark Ashton Smith (CAS) was unpublished is his lifetime, and is not available on The Eldritch Dark, so here's the full text:

Pentheus, come not here
Where the thyrsi rear
And the maenads' frenzy mounts.

The worship of Dionysus was centered in these two ideas so far apart - of freedom and ecstatic joy and of savage brutality.  The God of Wine could give either to his worshippers.  Throughout the story of his life he is sometimes man's blessing, sometimes his ruin.

In the case of Pentheus, it was surely the latter, as he was speared to death by his own mother: Agave of Thebes, the queen of the maenads.  The story ends on an even grizzlier note as the band of maenads tear Pentheus' body apart with their bare hands.  CAS' "Abstainer" thus serves as something of an unheeded warning delivered much too late.

Posted by Jeff in Bellingham at 6:30 AM