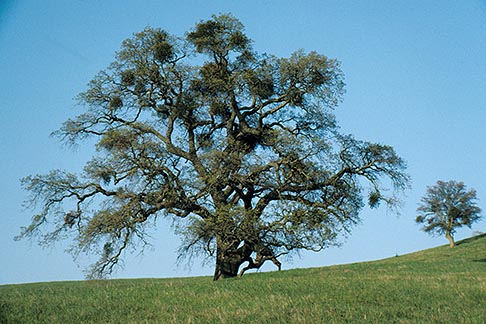 Read "Felo-de-se of the Parasite" at The Eldritch Dark:

The Latin phrase "felo de se" refers to a person who commits suicide.

In a letter to fellow writer Samuel Loveman* from 1919 (many years before this haiku was written), Clark Ashton Smith (CAS) provided some interesting background with reference to his home in California's Sierra Nevada foothills:

Glad you got the mistletoe.  It's very common here, and even kills some of the oaks on which it flourishes as a parasite.  I've seen them thicker with mistletoe than they ever were with their own foliage.  I admit a fondness for the stuff, with its old Druidic associations.

It's interesting how in this short poem "Felo-de-se of the Parasite" CAS casts the parasitic mistletoe (Phoradendron leucarpum) as a suicidal pest of the mighty oak, but of course, that is the fate of all parasitic plants which eventually kill their hosts.

*See letter #144 in Born Under Saturn: The Letters of Samuel Loveman and Clark Ashton Smith published by Hippocampus Press.