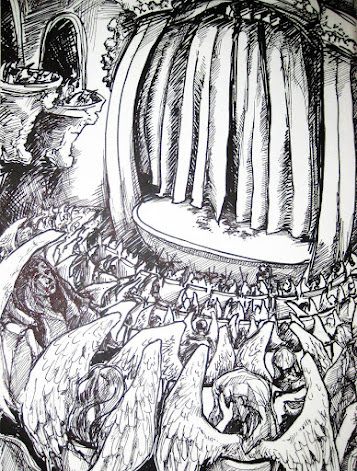 Read "'That Motley Drama'" at The Eldritch Dark:

This short poem from Clark Ashton Smith (CAS) was presented as a translation from the Spanish of Clérigo Herrero, although Herrero was in fact one of CAS' own pseudonyms.

It takes its title from Edgar Allan Poe's "The Conqueror Worm", where the phrase introduces the third stanza:

That motley drama—oh, be sure
It shall not be forgot!
With its Phantom chased for evermore,
By a crowd that seize it not,
Through a circle that ever returneth in
To the self-same spot,
And much of Madness, and more of Sin,
And Horror the soul of the plot.

Some commentators (notably Steven Behrends) have described CAS as being a misanthrope, and that sensibility certainly pervades "'That Motley Drama'", with its references to "Our puerile drama" and "man, the maniacal ape".  Those sentiments are well in line with the tone of Poe's "The Conqueror Worm", and yet I read CAS' poem as being inspired by something broader, namely a frustration with the cruelty of organic life:

What god will care to curse or bless
Nature, the crouching leopardess,
Or man, the maniacal ape?

Humanity may be a bunch of lunatic primates, but Nature itself is portrayed as predatory and remorseless.  So rather than misanthropy, I think "'That Motley Drama'" expresses outrage at the imperfect nature of the human experience, that run of pain and disappointment culminating in the silence of the grave.  It's an extreme viewpoint, but one that any intelligent person must consider from time-to-time, and CAS and Poe have both provided rich creative tapestries with which to dress those gloomy thoughts.

Posted by Jeff in Bellingham at 7:09 AM