For the Dance of Death 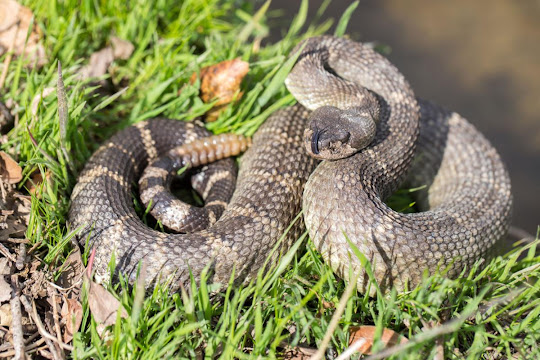 Read "For the Dance of Death" at The Eldritch Dark:

This poem from Clark Ashton Smith (CAS) includes the wonderful description "faint castanets": a perfect verbal rendition of the sound made by the rattles of the deadly venomous snake.

Also particularly effective is the phrase "stirless brake", capturing the perfect stillness preceding a potential moment of high drama.  Taken together, these elements create an almost cinematic palette, reminiscent of the best moments of the stylish western genre films of years past. 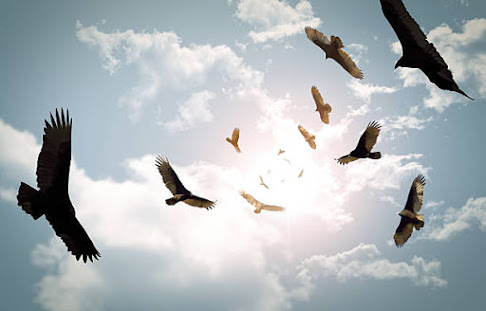 Posted by Jeff in Seattle at 7:31 AM No comments:

Baudelaire's original French text, as well as a number of other English translations, are available at the essential site FleursDuMal.org:

CAS' haiku "La Mort des Amants" can be read as an ironic counterpoint to Baudelaire's lush romantic verse, chronicling a quick and violent end to the loud lovemaking of felines.  It's tempting to read this haiku as something that CAS composed in the middle of the night, when the rowdy amours disturbed his sleep and made him wish for the utility of a handy firearm.  Or perhaps he did in fact fire that decisive bullet?

Posted by Jeff in Seattle at 7:19 AM No comments: 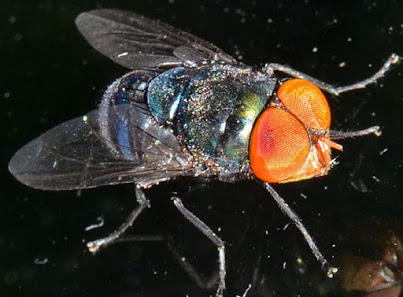 Read "Plague from the Abatoir" at The Eldritch Dark:

There's an unmistakable note of frustration in these lines from Clark Ashton Smith (CAS), as evidenced by the tone of the verbs: "Fall", "kill", "buzz", "blunder".  Not a lot of happy occurrences going on here!

Anyone who has ever encountered blow flies will share CAS' sentiments, as these loud and persistent creatures use their acute sense of smell to locate carrion.  Science tells us that they can detect a fresh kill up to a mile away, so it's no wonder they created a "Plague" for CAS given his residence not far from a slaughter-house in Auburn, California.

Posted by Jeff in Seattle at 8:26 AM No comments:

Read "Field Behind the Abatoir" at The Eldritch Dark:
http://www.eldritchdark.com/writings/poetry/188/field-behind-the-abatoir
This short poem from Clark Ashton Smith (CAS) is built on a wonderful use of alliteration on the letter "L", which ends on the tricky word "Thicklier".  What's remarkable is how CAS is able to use such an unmusical word so effectively: by itself, "Thicklier" seems about as unpoetic as an English word can be.
His strategy is to use alliterative phrases in combination with end rhymes on the first and third lines:
There's magic in that last line, where "Thicklier" completes the alliteration, and "grow" completes the end rhyme.  The short length of the haiku form calls for economic and thoughtful diction, and CAS succeeds marvelously in "Field Behind the Abatoir", where every single word choice contributes to the success of the complete work.
Posted by Jeff in Seattle at 7:13 AM No comments:

This poem from Clark Ashton Smith (CAS) continues a series inspired by an abattoir located not far from CAS' long-time home in Auburn, California.  This one comes close to respecting the accepted structure of haiku in English, which is not always the case with CAS' "Experiments in Haiku" (a grouping short verse included in his Selected Poems (1971)).

Despite the grim subject matter, there's a real beauty to "Slaughter-House Pasture", as it contrasts the detritus of the slaughtered ("Horned skulls and boned hooves") with natural litter ("the fallen leaves"), creating a distinct sensation of the calm after the storm.

Posted by Jeff in Seattle at 8:07 AM No comments:

Read "Cattle Salute the Psychopomp" at The Eldritch Dark:

This poem from Clark Ashton Smith (CAS) has a clear relationship to "Slaughter-House in Spring", which I read yesterday.  "Cattle Salute the Psychopomp"   presents a prelude to the activities which will soon be occurring at the abattoir, as those awaiting slaughter appeal to the cloak of night which will lead them to their fate.

Posted by Jeff in Seattle at 4:25 PM No comments:

Read "Slaughter-House in Spring" at The Eldritch Dark:

A toothless vampire tugs and mumbles
Some ancient trot's whitleather hide,
But he'll fly soon to the abattoir
And the pooling blood where the stuck pig died.

"Slaughter-House in Spring" feels spiritually related to the lines quoted above, as the grisly phenomena of the opening line are characterized as a "Taint" whose corruption fouls the "flowers and mossy stones."  Probably few human beings truly love abattoirs, but CAS views them as a source of iniquity, despoilers of beauty and nature.

Read "Snake, Owl, Cat or Hawk" at The Eldritch Dark:
http://www.eldritchdark.com/writings/poetry/510/snake%2C-owl%2C-cat-or-hawk
This short poem from Clark Ashton Smith (CAS) has a melancholy tone, given the focus on the dove chicks left without a mother.
I like the way the title provides a something of a dual role in relation to the content of the poem: one of the animals listed in the title was likely the hunter that left the nestlings motherless, and one of those animals also will likely bring an end to the short lives of the young birds.
Posted by Jeff in Seattle at 3:51 PM No comments:

Read "Girl of Six" at The Eldritch Dark:
http://www.eldritchdark.com/writings/poetry/215/girl-of-six
Although this poem from Clark Ashton Smith (CAS) violates the accepted structure of the haiku in English (three unrhymed lines of five, seven, and five syllables), it substitutes a very effective structure of eight, six, and six syllables.  This adds a momentum to the reading, which is solidified by end rhymes in the last two lines.
The elegant structure of this poem is greatly enhanced by the careful use of punctuation (two commas, a colon, and a period) to add explicit caesuras, so that when the text is read aloud, those pauses create a four-beat rhythm which comes so naturally to English speakers.
Despite the brevity of this work, it's obvious that CAS put some effort into it, as the structural elements noted above are quite thoughtfully developed.  It would be fascinating to learn how much time CAS worked on this poem, and how much revision he did along the way.  Alas, I suppose we'll never know!
Posted by Jeff in Seattle at 6:23 AM No comments:

Read "Grammar-School Vixen" at The Eldritch Dark:
http://www.eldritchdark.com/writings/poetry/219/grammar-school-vixen
This haiku from Clark Ashton Smith (CAS) presents a different aspect of the author's personality, assuming that there is a grain of autobiographical truth in these lines.  Much of his mature poetry is written from a boldly romantic stance, often accompanied by the suggestive swagger of an experienced seducer.
But in "Grammar-School Vixen", the speaker is the quarry, and seeks to elude the attentions of a young would-be paramour.  As a poem of childhood, it perfectly captures the confusing reality of the pre-pubescent male.
Posted by Jeff in Seattle at 6:26 AM No comments: