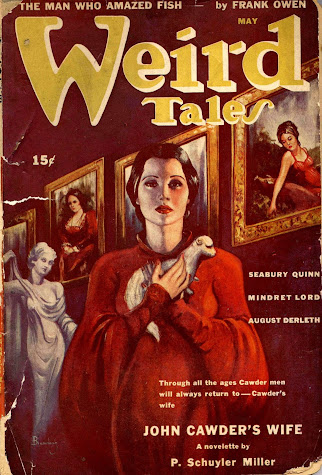 Read "Dialogue" at The Eldritch Dark:

This poem from Clark Ashton Smith (CAS) first appeared in the May 1943 issue of Weird Tales magazine under the byline of Timeus Gaylord (one of CAS' pseudonyms).

Although presented in the form of a sonnet, one could argue that this poem is also a poetic dialogue, since the opening octet and the closing sestet are each presented as being the words of a different speaker.

The first speaker seems a bold and adventurous sort, journeying as far as the "seven hells" and encountering legendary beings in further grim but fantastic exploits.

In contrast, the second speaker appears to be someone who is isolated and trapped in nightmares "When horror seeps from out four walls / And trickles from the unclouded sky."

Each speaker has, in his (or her) own way become enveloped in the cloak of the malignant and the weird, although their experiences of those phenomena have produced different results.

This contrast of viewpoints makes "Dialogue" into what must have been an ideal poem for the pages of The Unique Magazine, capturing all of the promised dark wonder of those pages in a short and accessible sonnet.

Posted by Jeff in Bellingham at 7:16 AM