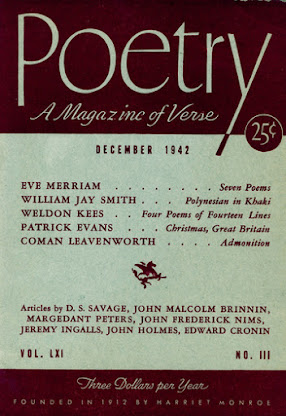 Read "The Old Water-Wheel" at The Eldritch Dark:

This poem from Clark Ashton Smith (CAS) first saw publication in the December 1942 issue of Poetry magazine, marking one of his few appearances in that long-running publication.  Their archive contains a scan of the work as it appeared in print:

The poem presents a melancholy image of isolation and despondency:

A dolent, drear, complaining note
Whose all-monotonous cadence haunts the air
Like the recurrent moan of a despair
Some heart has learned by rote.

It's a grim read, but powerfully animated by the presence of sound throughout, as the motion of the water-wheel becomes a metaphor for the emotional and spiritual rut that the speaker finds himself in.

That correspondence is captured by parallel diction in the second and fifth stanzas, where the stream that powers the wheel "by noon, by night, by dawn" almost mocks the speaker's distress "today, tonight, tomorrow".  And yet the implied relationship is not morbid, but almost comforting as the speaker's own internal state is echoed by the tangible world of his physical surroundings.

Posted by Jeff in Bellingham at 7:27 AM