A diversion: the poetry of Eric Barker 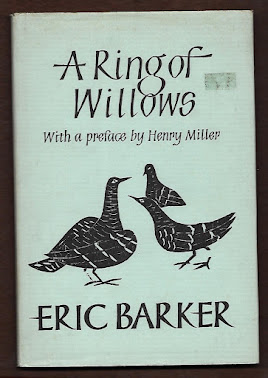 Clark Ashton Smith (CAS) was good friends with the poet Eric Wilson Barker and his wife, the dancer Madelynne Greene.  In a blog post from a few years ago, I considered some criticism of CAS' poetic practice that Barker made in a commemorative essay on his relationship with The Bard of Auburn:

More recently, I've been reading CAS' correspondence with the poet Samuel Loveman, and came across these thoughts penned by CAS*:

I believe you will find the Barkers very congenial; they, like you and I, are pagans haunted by the nostalgia of antique beauty.  I owe them many of my happiest days, and have found something of the Golden Age in their company.

Eric is a true poet, especially in his feeling for the more inward and mystic springs of nature.

As it happens, I just finished reading a book of Barker's poems published in 1961 (the same year that CAS died).  A Ring of Willows seems to have been Barker's best-known collection of verse, and having read it, I can't equal CAS' enthusiasm.  Of course, CAS' statement above really refers only to the poet and not the poetry itself, but the latter is all I have to evaluate.

Overall, the poems in A Ring of Willows represent modernist poetry at it very dullest, with practically no music at all in the language, and rather mundane takes on subjects focused on landscapes and wild creatures.  The one poem in this collection that really works is "The Deserted", a description of an abandoned house which manages to achieve some real poetic effects in its final stanza:

It made me think of those who lived there once,
who must have chosen such a cloud-loved hill
for what to them was seeming permanence.
And what ill circumstances had tripped them up,
and set against the walls those smoldering fires
that eat a house to death with shameless wounds.

As I noted in my blog post from August 2018 (linked above), Barker's own evaluation of CAS' poetry seemed to miss the mark in citing "picturesque and archaic language" as the source of "his weakness as a contemporary poet."  In that same essay, Barker further noted that "it is the poets who change the language and so save it from sterility."  There is no evidence at all of Barker himself trying to take on that challenge in the verses included in A Ring of Willows.

Interestingly, the prominent twentieth century American poet William Dickey reviewed A Ring of Willows in the November 1961 issue of Poetry magazine, and seems to have arrived at much the same conclusion as I have:

This poetry is often based on descriptions of nature, descriptions which in their simplicity of diction edge over toward (Robert) Frost. But there is not much of Frost's economy - Barker cannot resist persistent double phrases - and there is almost nothing of Frost's bite.

My intention in this post is not to try and raise CAS up by knocking Eric Barker down, but rather to reflect on CAS' lack of inclination to follow trends in poetry that were dominant in his lifetime, and how Barker seems to have made the opposite decision.  Several decades on, it seems quite clear to me that CAS' efforts led to the creation of a body of work that has some truly timeless qualities, while Barker's own verses failed to transcend the modernist idiom that he employed, and thus have been almost entirely forgotten.

*See letter #365 in Born Under Saturn: The Letters of Samuel Loveman and Clark Ashton Smith published by Hippocampus Press.

Posted by Jeff in Bellingham at 6:23 AM