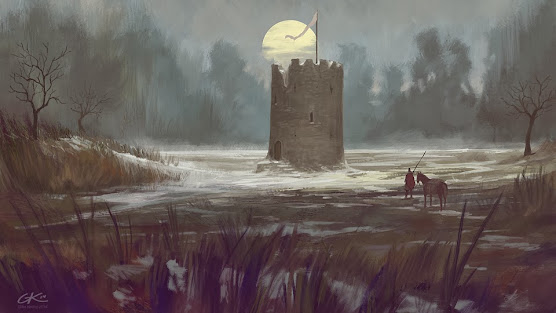 Read "Amithaine" at The Eldritch Dark:

Clark Ashton Smith (CAS) described this poem in a letter* to August Derleth from October 1950, discussing a selection of verses included with his letter:

Of these verses, Amithaine seems to me particularly significant since it seems to crystallize an ideal of romantic and imaginative beauty...what would the typical science fiction fan make of a symbolism such as "Whose princes wage immortal wars / For beauty with the bale-red stars?"  He'd probably think the "princes" were making war on Aldebaran, or Antares, or repelling invaders from Mars or Saturn! instead of battling against destiny as symbolized by the "stars" of astrology.

This poem is certainly full of "romantic and imaginative beauty" derived from the strong musicality of the language, which almost compels reading aloud.  A reader can enjoy this poem simply at the surface level (ignoring the symbolism) because the strains of chivalric glory sound so clearly throughout.  Viewed in those terms, the fourth stanza is particularly effective:

Dreamer, beware! in her wild eyes
Full many a sunken sunset lies,
And gazing, you shall find perchance
The fallen kingdoms of romance,
And past the bourns of north and south
Follow the roses of her mouth.

I feel like I could read an entire novel about a woman in whose "wild eyes...many a sunken sunset lies"!

A second reading focused on the symbolism reveals the true beauty of "Amithaine", where the poem becomes a manifesto for the creative life.  I can't help hearing CAS' own voice, particularly in the wonderful closing lines: "Dreamer, awake!... but I remain / To ride with them in Amithaine."  It's a powerful statement of the poet's own quest, a coda at the tail end of the spell whose magic persists throughout the artist's body of work.

Posted by Jeff in Bellingham at 6:53 AM