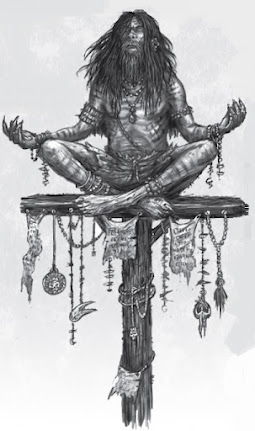 Read "The Stylite" at The Eldritch Dark:

Stylites make occasional appearances in the poems of Clark Ashton Smith (CAS): see for example my comments on his haiku "Paphnutius" in an earlier blog post:

As Anonymous commented on that blog post, CAS' short story "The Door to Saturn" also mentions the phenomenon, although in a decidedly science-fantasy context:

And during the following day they journeyed among more than one of those unusual races who diversify so widely the population of Saturn. They saw the Djhibbis, that apterous and Stylitean bird-people who roost on their individual dolomites for years at a time and meditate upon the cosmos, uttering to each other at long intervals the mystic syllables yop, yeep, and yoop, which are said to express an unfathomed range of esoteric thought.

The Stylite lifestyle is certainly a curiosity among the legends of Christian asceticism, and in "The Stylite", CAS focuses on the strange hallucinations and worldly temptations that can plague one engaged in such a lonely pursuit:

On the older blog post I linked above, Anonymous left this thoughtful observation:

I wouldn't be surprised if he (CAS) was inspired by the idea of a person who could spend much of their life in the boundless heavens, where no one else would go, and at the same time allowed his pagan and cosmic interests to fill that heavenly space.

That comment applies equally to "The Stylite" as it does to the haiku "Paphnutius".  I don't doubt that CAS found the extremity of the Stylite practice to have a strong connection to his own cosmic viewpoint, as well as to the rather reduced lifestyle to which CAS was often subjected, given his aesthetic pursuits and their limited financial rewards.

This is not the last poem from CAS that deals with Stylites: in my next blog post, I'll  look at a ribald take on the same subject that was not published in the author's lifetime.

Posted by Jeff in Bellingham at 7:06 AM

Email ThisBlogThis!Share to TwitterShare to FacebookShare to Pinterest
Labels: Eldritch Dark, Stylite, The Dark Chateau and Other Poems