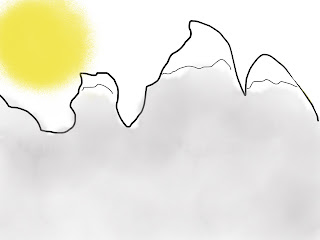 This is another poem unpublished during Clark Asthon Smith's (CAS) lifetime, and not available on The Eldritch Dark, so here's the text of the poem itself:

Clear-cut the mountains tower high,
Against the paling eastern blue;
As snow-crowned kings they seem to lie,
Enwrapt in robes of purple hue.

Now suddenly upon the snow
Of yonder peak Day's lance-points gleam,
And tipped with flame, set it aglow --
A crimson beacon-pyre supreme

That signals the retreat of Night,
Whose sovereignty grows old and wan,
And who afar must wing her flight,
Before the banners of the dawn.

In harness brave soon comes the Sun,
To enter on his ancient reign,
And sets his regal seal upon
The far expanse of his domain.

This is a fairly straightforward nature poem, but nonetheless features strong imagery and wordplay.  The last stanza particularly appeals to me, with a strong evocation of the Sun claiming his dominion (at least for several hours, anyway).

Email ThisBlogThis!Share to TwitterShare to FacebookShare to Pinterest
Labels: Unpublished