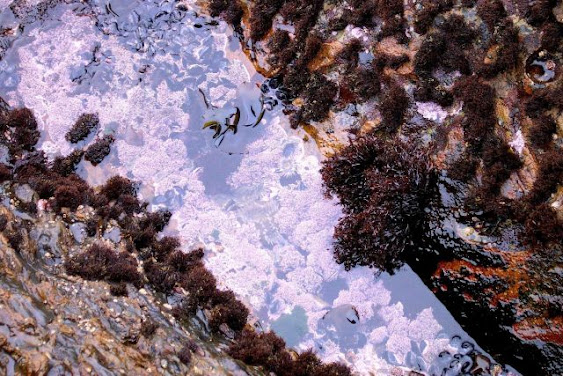 Read "Pool At Lobos" at The Eldritch Dark:

Point Lobos was a part of the California landscape beloved to George Sterling, who would pass on that love to both Clark Ashton Smith (CAS) and Robinson Jeffers, younger poets to whom Sterling served as something of a mentor.

Sterling spent part of his life in nearby Carmel-by-the-Sea, and Point Lobos found its way into his verse, as in the somewhat overwrought "An Alter of the West", which has moments of beauty scattered amongst the verbosity:

Past Carmel lies a headland that the deep—
A Titan at his toil—
Has graven with the measured surge and sweep
Of waves that broke ten thousand years ago.

Robinson Jeffers has written of Sterling's Indian-like familiarity with the coast about Carmel. Truly, he was the genius of that scene and nothing escaped his observation and knowledge. I remember the hidden sea-cavern that he showed me below Point Lobos; the places where wild strawberries grew the thickest; the abalone-reefs; and the furtive incursions of a strange lurid red fungus that he pointed out to me on the Lobos cypresses.

The inspirational quality of the spectacular setting of Point Lobos is evident in that passage, and even more so in Jeffers' long poem "Point Pinos and Point Lobos", as in this short excerpt:

In "Pool At Lobos", CAS presents a humbler experience, but one that has considerable charm, achieved by capturing the almost imperceptible movement of water in the slow gyrations of sea anemones and shells.

Sterling, Jeffers, and Smith are certainly not the only artists that have ever found inspiration at Point Lobos, but their unique responses to those surroundings are wonderfully individual and reflective of the variety of expression that is possible via the medium of poetry.

Posted by Jeff in Bellingham at 7:03 AM