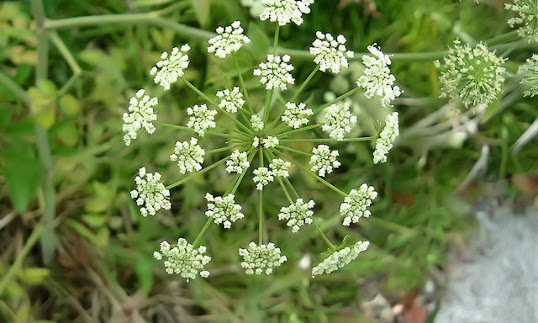 Read "Water-Hemlock" at The Eldritch Dark:

Yesterday, I posted about Clark Ashton Smith's (CAS) poem "Berries of the Deadly Nightshade", which takes for its topic the toxic fruit of Atropa belladonna.  The common name "water hemlock" is applied to several plants of the genus Cicuta, most of which are also poisonous to humans.  As the relevant Wikipedia article reminds us, "Water hemlock is considered one of North America's most toxic plants."

So its not a surprise that CAS chose to write about water hemlock, given his predilection for looking beneath the surface of things and seeing beyond the pretty flowers (as shown above).  The closing phrase "Rooted with death" has dual meanings, given that the roots of water hemlock tend to have the highest concentration of cicutoxin, but also highlighting the inability of "the south wind's breath" to displace the threat.