The Ghost of Theseus 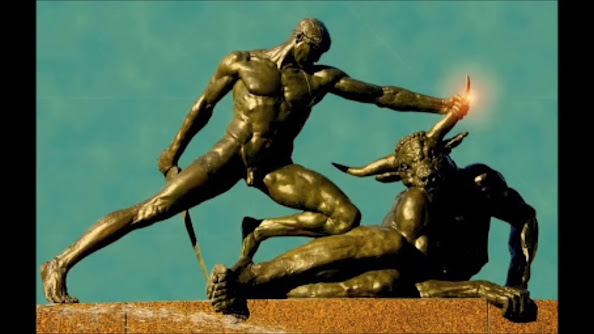 Read "The Ghost of Theseus" at The Eldritch Dark:

This haiku from Clark Ashton Smith (CAS) is the last in a grouping of poems labeled "Strange Miniatures" from his omnibus Selected Poems (1971).  It is of course inspired by the well-known story of the legendary Athenian hero exploring the labyrinth in order to confront the fearsome Minotaur.

CAS describes the aftermath of that famous event, suggesting that upon Theseus' own death, he was doomed to haunt the maze-like interior of the labyrinth, essentially taking the place of the Minotaur, although in a spectral form.  It does speak to a sort of poetic justice, given that the Minotaur was an innocent, the unnatural offspring of a bull and King Minos' wife Pasiphaë, a coupling triggered by the god Poseidon as an act of revenge on Pasiphaë's husband.

Posted by Jeff in Bellingham at 7:14 AM