Shapes in the Sunset 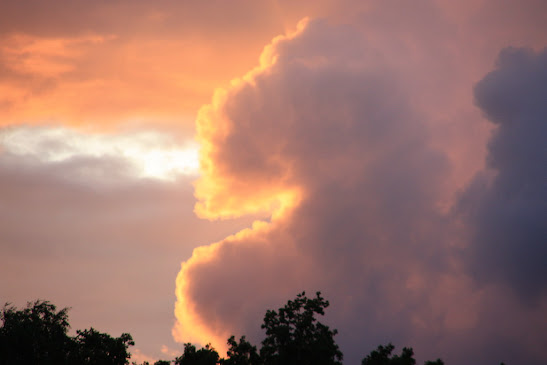 Read "Shapes in the Sunset" at The Eldritch Dark:

This poem presents musings on cloud shapes as only Clark Ashton Smith (CAS) could conceive them.  Not surprisingly, many of the images are drawn from classical Greek mythology, and some of the more obscure characters are drawn from the lineage of ancient Greek and Roman literature, such as the Astomians, Blemmyes, and a Sciapod.

As is not uncommon in CAS' verse, the poet's own voice rings clearly in the closing stanza:

I, the watcher, cried: "O clouds of wonder,
Fables, carry me where an age-long sunset
Arches your lost Thule, by no sullen
Earth-born shadows blotted!"

The many fantastic shapes seen in the sunset clouds are more than imaginative visualizations, as they come to embody the speaker's longing for the glories of the great age of myth and fable.  And yet the rich visions of the preceding stanzas suggest that the speaker has in fact achieved his goal, albeit within the non-corporeal realm of the mind's eye.

Posted by Jeff in Bellingham at 5:35 AM

Email ThisBlogThis!Share to TwitterShare to FacebookShare to Pinterest
Labels: Eldritch Dark, The Black Book of Clark Ashton Smith, The Dark Chateau and Other Poems