A diversion: Kenneth Yasuda on CAS 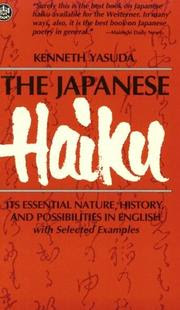 A couple of days ago, Omoultakos made a very relevant comment in my blog post about Clark Ashton Smith's (CAS) haiku "Unicorn", wherein he noted CAS' relationship with Kenneth Yasuda.

Although not many details of their relationship are known, they were both natives of Auburn, California and were both practicing poets.  Yasuda notably authored the book The Japanese Haiku: Its Essential Nature, History, and Possibilities in English, with Selected Examples (1957).  This book remains in print today as an e-book (the last printed edition was issued in 2002).

In the "Acknowledgements" section of his book, Yasuda mentions CAS:

This book was originally submitted to Tokyo University as a doctoral thesis in 1955 under the title On the Essential Nature and Poetic Intent of Haiku.  It represents a formal presentation of material - a part of which first appeared in the introduction to my collection of haiku, A Pepper Pod - that is the culmination of an interest in haiku dating from many years ago.

I am very deeply indebted to many people for encouraging me to pursue that interest and for their help in clarifying my thinking and poetic practice.  Among them are Masao Kume and Kyoshi Takahama in Japan; John Gould Fletcher, Clark Ashton Smith, Babette Deutsch, Mark Van Doren, and George Savage in America.

While something of a footnote in the life of CAS, this acknowledgement does indicate that CAS' poetic talents were recognized outside the small field of weird fiction writers, and seems to indicate that CAS had a substantial knowledge of the haiku poetic form.

Posted by Jeff in Bellingham at 7:08 AM