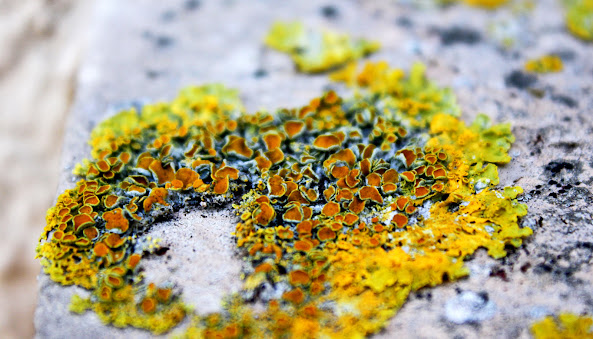 Read "Growth of Lichen" at The Eldritch Dark:

Lichens are mentioned in several poems from Clark Ashton Smith (CAS), and this haiku makes for an interesting companion piece to the longer poem "Lichens" (see my blog post on that poem).

In that post I mentioned "CAS' ability to see the inherent magic in the lowly (and easily-ignored) lichens", which applies as well to the haiku "Growth of Lichen".  In this short verse, CAS tracks the many days that have passed over a slow-growing patch of lichen.

These unusual life forms (the composite of a fungus with either algae or cyanobacteria) have annual growth rates of just one or two millimeters, so CAS is not exaggerating in his closing line "Ten thousand suns have gone."

Lichens hold a special interest for me, since in years previous I was on the verge of becoming a graduate student in lichenology, but was lured away by better opportunities in the software industry.  Despite not pursuing that particular path, I've never lost my interest in one of this planet's most unusual organisms, so CAS' careful observations of the lowly lichen have a real resonance for me.

Posted by Jeff in Bellingham at 6:48 AM