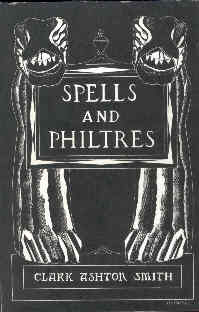 Read "Unicorn" at The Eldritch Dark:

This is the first in a large series of poems that Clark Ashton Smith (CAS) wrote in the haiku form.  It's interesting that CAS adopted this form, both because it emphasizes very short, unrhymed verse, but also because the form was so popular with poetic modernists (such as Ezra Pound).  As a general rule of thumb, CAS was not a huge fan of the modernist poetry movement, so I'm quite curious as to how The Bard of Auburn worked in this form.

"Unicorn" was included in Spells and Philtres (1958) CAS' second poetry collection published by Arkham House.  Several poems in the haiku form were included in that volume under the heading "Strange Miniatures", and "Unicorn" is the lead entry in that section.  Additional haiku are included in the same volume in a section titled "Distillations".

CAS includes end rhymes in "Unicorn", so from the get-go it's clear he was forging his own path even while adopting an established poetic form.  He has used a legendary subject for his verse, clearly in line with his well-established interests in mythology and the weird.

It's not a standout poem by any means, but as an entrée into a new poetic technique late in CAS' career, it's a fascinating start to a new phase of his creative process.

Posted by Jeff in Bellingham at 7:18 AM