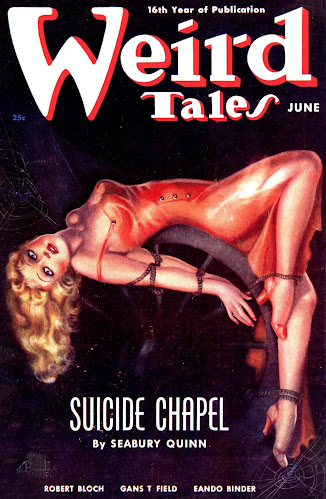 Read "Farewell to Eros" at The Eldritch Dark:

This poem from Clark Ashton Smith (CAS) was first published in the June 1938 issue of Weird Tales magazine.  It speaks to a passionate relationship, one that seems to have an all-consuming impact on the narrator, the pending dissolution of which has left him bereft:

Not now the weary god deserts the worshipper,
The worshipper the god ... but in some cryptic room
A tocsin tells with arras-deadened tones of doom
That hour which veils the shrine and stills the chorister.

But the narrator has not reached the end of his rope: "I shall go forth to madder gods and mysteries."  The following stanzas make references to fantastic worlds associated both with CAS (Zothique) and other contributors to Weird Tales (Aquilonia, Cimmeria, etc).  Ultimately, the poem returns to the departed Eros:

Yea, in those ultimate lands that will outlast the Earth,
Being but dream and fable, myth and fantasy,
I shall forget ... or find some image reared of thee,
Dreadful and radiant, far from death, remote from birth.

This is that rare poem from CAS that I want to like more than I actually do.  It's rich with emotion and imagery, and yet somehow as a complete work it doesn't really come together, substituting a collection of interesting parts for the lack of a cohesive whole.

Posted by Jeff in Bellingham at 9:29 AM