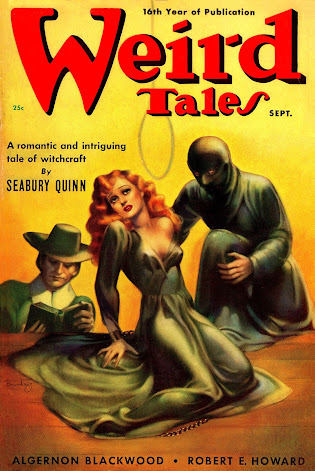 Read "The Prophet Speaks" at The Eldritch Dark:

In this work, I detect the voice of the poet himself expressing a personal viewpoint.  Although these lines are embellished with fantastic imagery derived from ancient history and myth, the core subject reflects the poet's disdain for the modern age in which he lived, particularly his dislike of crowded urban landscapes:

O city consecrate to crime and greed!
O scorner of the Muses' messenger!
Within your heart the hidden maggots breed.

The phrase "scorner of the Muses' messenger" really speaks to CAS' role as an impoverished artist, a creative spirit adrift in a culture of accumulation and aspiration.  But CAS' impish humor is still present, especially in the very final lines:

The sea, withdrawn from littorals desert-hearted,
Shall leave you to the silence of the sky—
A place fordone, forlorn, unnamed, uncharted,
Where naught molests the sluggish crotali.

By "crotali", I presume CAS is referring to Crotalus, the genus of pit vipers (aka rattlesnakes), rather than Porocephalus crotali, the parasitic tongue worms.

The idea of nature reclaiming Mammondom seems like something that would have held immense appeal for CAS, given his lifelong attachment to the wild Sierra Nevada foothills around Auburn, California.  His ability to cast those sentiments in wild and fantastic verse makes "The Prophet Speaks" a thrilling experience for any reader in sympathy with those same notions.

Posted by Jeff in Bellingham at 8:33 AM