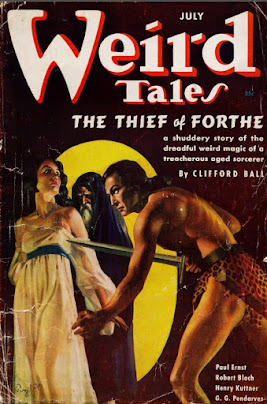 Read "To Howard Phillips Lovecraft" at The Eldritch Dark:

Considering that the subject of the poem is someone that CAS never met in person, it's really quite a moving memorial, written shortly after Lovecraft's death in March 1937:

And yet thou art not gone
Nor given wholly unto dream and dust:
For, even upon
This lonely western hill of Averoigne
Thy flesh had never visited,
I meet some wise and sentient wraith of thee,
Some undeparting presence, gracious and august.

Earlier in his career, CAS wrote a number of tribute poems to his mentor George Sterling, most of which struck me as being rather dry and cold.  "To Howard Phillips Lovecraft" is something quite different, filled with genuine emotion in remembrance of a friend who clearly had a meaningful impact on CAS' own life.

Posted by Jeff in Bellingham at 7:09 AM