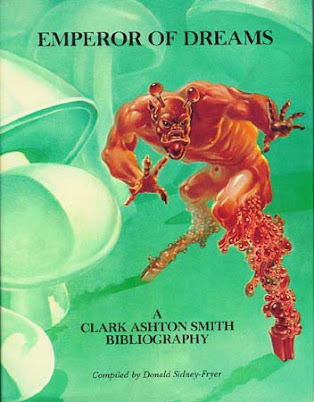 This poem from Clark Ashton Smith (CAS) is a variant of the poem "Cycles", which was the last poem that he wrote before his death in 1961.  This early version was published in fan magazine The Acolyte in 1944.

(A draft version of this poem also appears as item #71 in the Arkham House edition of The Black Book of Clark Ashton Smith).

It's also probably the first poem by CAS that I ever read, since Donald Sidney-Fryer used it as the coda for his 1978 volume Emperor of Dreams: A Clark Ashton Smith Bibliography, a book that I had access to long before I ever saw any collection of CAS' verse.

The full text of "The Sorcerer Departs" is not available on The Eldritch Dark, so here it is:

I pass . . . but in this lone and crumbling tower,
Builded against the burrowing seas of chaos,
My volumes and my philtres shall abide:
Poisons more dear than any mithridate,
And spells far sweeter than the speech of love . . .
Half-shapen dooms shall slumber in my vaults,
And in my volumes cryptic runes that shall
Outblast the pestilence, outgnaw the worm
When loosed by alien wizards on strange years
Under the blackened moon and paling sun.

After all these years, this is still one of my favorite poems from CAS.  Using the classic English form of blank verse in iambic pentameter (so familiar from the plays of William Shakespeare), CAS delivers some of his most characteristic and spellbinding phrases, such as "the burrowing seas of chaos" and "cryptic runes that shall / Outblast the pestilence, outgnaw the worm".

Presented as the last thoughts of a mage at the end of some phase of existence, it's hard not to read something of the author and his own legacy into these lines.  At the time that CAS wrote "The Sorcerer Departs", his works of fiction had just started to be issued in hardcover by Arkham House, giving him the assurance that some part of his creative output would persist.

Following this train of thought, the act of reading "cryptic runes" penned by CAS is the act of releasing the "Half-shapen dooms" that the poet describes.  By extension, that makes those of us who read CAS today the very "alien wizards" he so wisely prophecies.  I can't think of a better way for a writer to sum up his life's work and his hopes for the future.

Posted by Jeff in Bellingham at 6:52 AM