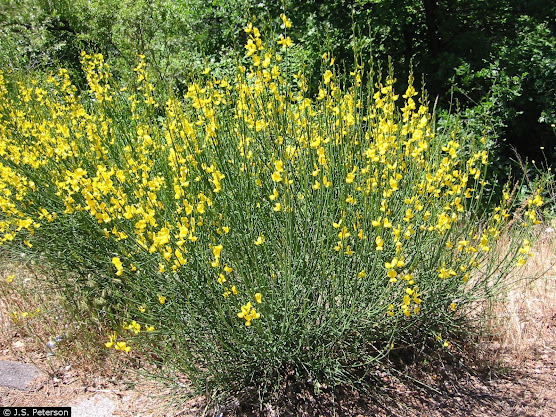 Read "Aftermath of Mining Days" at The Eldritch Dark:

In this haiku from Clark Ashton Smith (CAS), I believe "broom" refers to Cytisus scoparius, better known as Scotch broom, an invasive plant that has become endemic throughout CAS' home state of California.  I live in Washington state, and Scotch broom is also an invasive species in these parts, as it is apparently up-and-down the west coast of North America.

The opening line "Monotonously rolled" seems to capture exactly that characteristic of this plant: its robust and ready fertility, and its ability to quickly colonize disturbed areas (such as after logging or construction).

All the same, CAS spares a thought for "its many-acred gold", acknowledging the plentiful bright flowers that make this plant so easily recognizable.

Posted by Jeff in Bellingham at 8:03 AM