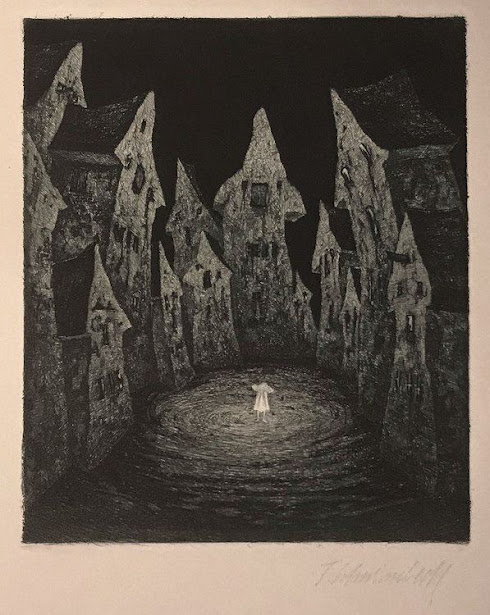 Read "Windows At Lamplighting Time" at The Eldritch Dark:

I was recently introduced to the artwork of the late Fritz Schwimbeck via the excellent Monster Brains blog.  Among his highly atmospheric and evocative works, there is a series called "Phantasien uber ein Altes Haus", which can be translated into English as "Fantasies of an Old House".  The image above is drawn from that series.

The haiku "Windows At Lamplighting Time" has a much different tone than Schwimbeck's work, and yet I think there is a connection between the paranoid image and the warmer, homelier words of Clark Ashton Smith (CAS).

In particular, it's notable that CAS begins his poem with the phrase "Black houses" and ends with "sunset darkens".  Those are innocuous phrases on the surface, but taken together they wrap the poem in a pair of dark images.  Of course, the centerpiece of the poem is the welcoming phrase "squares of golden dawn", and yet "Windows At Lamplighting Time" does imply a certain fear of the encroaching dark, and a need to seek refuge from the chaotic spirits that awaken at day's close.

Posted by Jeff in Bellingham at 6:08 AM