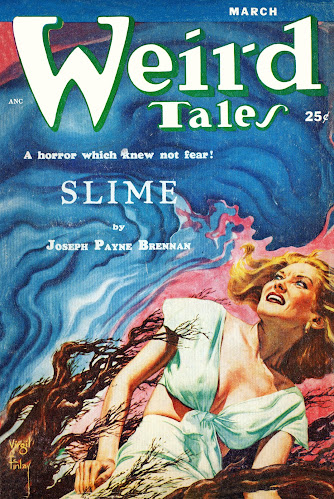 Read "Don Quixote on Market Street" at The Eldritch Dark:

This poem marked another late appearance of work by Clark Ashton Smith (CAS) in Weird Tales magazine, in the issue for March 1953.

The "Market Street" of the poem's title presumably refers to the road of the same name in San Francisco (SF), a city that CAS visited many times in his life.  Even today, Market Street is a major transit artery and one of the principle thoroughfares in the Golden Gate City.  I briefly lived in SF a few years ago, and crossed Market Street multiple times a day walking between my residence in the Tenderloin and my job in the SoMa (South of Market) neighborhood.

I'm currently reading Born under Saturn: The Letters of Samuel Loveman and Clark Ashton Smith, and in that correspondence, CAS often mentions his dislike of cities in general, and SF in particular.  His complaints usually focus on noise, crowds, and distraction, all of which inform "Don Quixote on Market Street".  The figure of Quixote fits the scenario very well, bringing with him so many associations of grand ambition untethered to earthly realities:

Chivalry
Has flown to stars unsooted by the fumes
That have befouled these heavens, and romance
Departing, will unfurl her oriflammes
On towers unbuilded in an age to be.

The poem is an amusing rendering of some of the author's own concerns, and although I think he addressed some of the same ideas more succinctly elsewhere (as in the excellent "Desert Dweller"), "Don Quixote on Market Street" succeeds by tapping into the rich vein of world literature to create a work that speaks well beyond the author's own lifetime.

Posted by Jeff in Bellingham at 6:25 AM

Email ThisBlogThis!Share to TwitterShare to FacebookShare to Pinterest
Labels: Born Under Saturn, Eldritch Dark, The Black Book of Clark Ashton Smith, The Dark Chateau and Other Poems, Weird Tales magazine