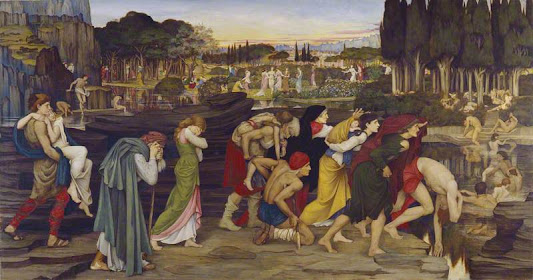 This is another poem from Clark Ashton Smith (CAS) that was unpublished in his lifetime, and is not available on The Eldritch Dark, so here's the complete text:

Somber and waveless on the waters
for him that lingers at the wharf of Lethe,
enduring the tremors of an old desire
to essay the lonely and enormous night.
For him the enchanted fields of poppy
sigh and whisper in a wind
from the pole that has no pole-star; in his passing
he tramples the dark tails of nameless things.

CAS also created a Spanish version of this same poem with the title "Leteo".

It's interesting to note that in my chronological journey through CAS' poetry, this is the fourth poem named "Lethe" that I've read.  You can click the link of the same name below to see my comments on the other three works that share the same name.

Of course, CAS wrote many poems that reference the river Lethe, but it's interesting to take a smaller focus and examine only those to which he assigned the same title.

This particular poem seems to me the most impressive of that particular group of verses, for while the waters of the river of oblivion beckon, the subject of the poem "lingers at the wharf of Lethe", suggesting a hesitation to slip beneath those soothing waters.  And yet it seems that he does go forward and release himself to the riverine flow.

This version of "Lethe" is short but poignant, and leaves room for interpretation.  That's one definition of great literature, as articulated by the late writer Gene Wolfe (himself an admirer of CAS):

My definition of good literature is that which can be read by an educated reader, and reread with increased pleasure.

Posted by Jeff in Bellingham at 6:35 AM