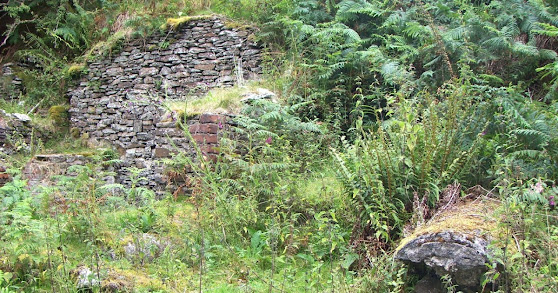 Here is another poem from Clark Ashton Smith (CAS) that was unpublished in his lifetime, and is not available on The Eldritch Dark, so here's the full text:

I love the fields and gardens
invaded by the wilderness,
retaken by weeds and herbs
that open their faithful flowerets
full of perfumes and honies.
I love the desolate apple-orchards --
the dying trees
lined with lichens --
I love the vines in the fruit-trees --
the mistletoe in the pear-tops.
I find, in some woodland bower,
the stones of a fallen fire-place
where springs a forsaken rose-bush
to which from all the country-side
voyage the vivid humming-birds.
At the edge of the cat-tails,
I know an ancient shed
with moss-grown reddish wall --
a house for vermin and fungi,
a factory of cobwebs.
Enisled among the bramble thickets,
I have seen a pathless meadow
where an aged quince-tree
bequeathes its wintry fruit
to the water of quagmires.
I have seen in the twilight,
beside a roofless pavement,
the flowers of the plum-tree whiten
like a pale phantom
called up by some grey magician.
And when the flickering bats
veer though the evenfall,
I scent the flying petals
of former life
in the mystic boughs.

It's unusual to find a poem from CAS that includes the phrase "I love"; for although he wrote quite a number of love lyrics, he rarely used the word itself in such direct terms.

Of course, "Lost Farmsteads" is not a love poem, but a more of a pastoral musing on time passing.  Even when tackling such bucolic subject matter, CAS still manages to find a place for the weird imagery that he is known for:

I have seen in the twilight,
beside a roofless pavement,
the flowers of the plum-tree whiten
like a pale phantom
called up by some grey magician.

"Lost Farmsteads" is not one of CAS' greatest verses, but it has a quiet charm all its own.

Posted by Jeff in Bellingham at 6:47 AM

Email ThisBlogThis!Share to TwitterShare to FacebookShare to Pinterest
Labels: Translated into Spanish, Unpublished