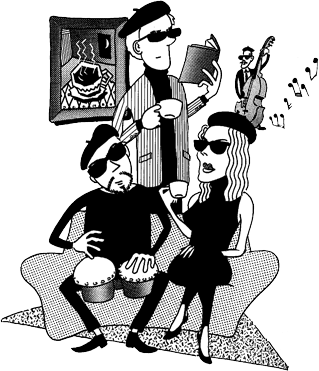 Read "Almost Anything" at The Eldritch Dark:

This is a fairly throwaway poem from Clark Ashton Smith (CAS), a snarky comment on modernist poetry that amounts to a missed shot.

The first stanza attempts to parody the excesses of poetic modernism, but does a pretty poor job hitting the mark; one gets the impression that CAS had in fact read very little of the sort of verse he sought to lampoon.

The second stanza presents the argument of the modernist poet, quoting Charles Baudelaire along the way: the line "Hypocrite lecteur, mon semblable, mon frère" is from "Au Lecteur" (aka "To the Reader"), the introduction to Baudelaire's Les Fleurs du Mal.  The line can be translated into English as "Hypocrite reader, my fellow, my brother!"

"Au Lecteur" is well worth reading in full when contemplating CAS' "Almost Anything", as it presents Baudelaire's argument for the controversial content of his volume.  Multiple English translations can be found online; I think the best of these comes from Robert Lowell (the fourth version on the page linked below):

In the argument that concludes "Almost Anything", CAS seems to have missed the point that Baudelaire made in "Au Lecteur".  In the voice of a unnamed modernist poet, CAS writes:

What is the use of writing this modernist poetry
If one is not permitted
To be decently or indecently cryptic on occasion? . . .

Writing in the nineteenth century, Baudelaire sought to justify the then-scandalous content of Les Fleurs du Mal simply by pointing out that he wrote about those baser things in which practically all humans revel from time-to-time, whether or not we wish to have our naughty little dalliances publicly known.

CAS' own words, quoted above, may have been offered with satiric intent, and yet they do in fact justify the very poetic modernism that is his target.  All serious forms of art sometimes incorporate dislocation, mis-direction, and obscurity, simply because those sensations are a part of the human experience.  An excessive reliance on impenetrability can, of course, be tedious for an audience and is likely the hallmark of an artist who has not mastered their form, and yet a little ambiguity can go a long way to enriching creative expression to fully capture the complexities of the human condition.

Posted by Jeff in Bellingham at 6:07 AM