Sonnet for the Psychoanalysts 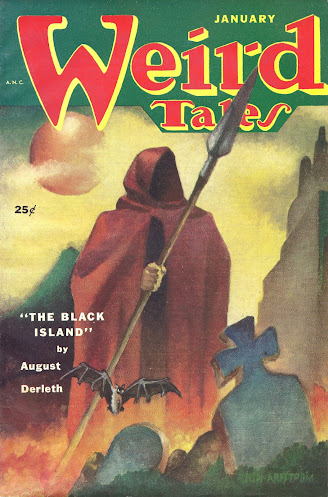 Read "Sonnet for the Psychoanalysts" at The Eldritch Dark:

This poem marked the late appearance of a work from Clark Ashton Smith (CAS) in Weird Tales magazine (January 1952), long after he had ceased to be a regular contributor in the 1930's.

The author appears to be having a bit of fun at the expense of a certain class of mental health professionals, and yet even the extremely disjointed dream imagery at work in this poem is not without its charms:

Beyond,
in balconies that craned on vacant skies,
one booted leg went striding sentry-wise.
It was my own.

Although "Sonnet for the Psychoanalysts" was likely intended more as a social statement than as a work of art, it's an interesting read simply for the cynical sense of humor that CAS unleashes.  That particular tone is not infrequently found in his letters, but it rarely makes an appearance among his works in verse.

Posted by Jeff in Bellingham at 6:45 AM