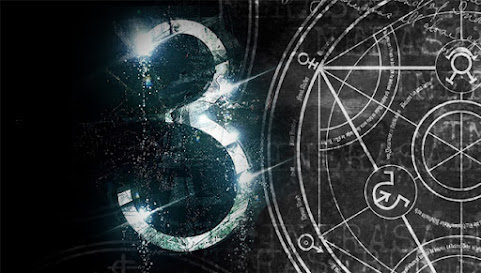 This poem from Clark Ashton Smith (CAS) was not published in his lifetime, and is not available on The Eldritch Dark, so here's the complete text:

Three crows
On the scarecrow,
In the pear-orchard;
Three rabbits,
Peacefully nibbling in a corner of the cornfield;
Three cockroaches,
Floating belly-up in a pail-ful of cream
In Mrs. Hoskins' pantry;
Three Peruna bottles,
All empty but one,
On the bureau in Mrs. Hoskins' bedroom;
Three jugs of hard cider,
Under the seat of Farmer Hoskins' buggy,
Returning from the corner store....
O! Mystical number!

In the Hippocampus Press edition of The Complete Poetry and Translations of Clark Ashton Smith, editors S.T. Joshi and David E. Schultz describe this poem as "Another satire on modern poetry."

I don't doubt that it does qualify thus to be grouped with "Almost Anything" and "La Muse moderne", both of which I blogged about earlier this month.  And yet it seems to me that there is a bit more to the "The Mystical Number", given that symbolic associations of the number three are manifold across human cultures.

In Jean Chevalier and Alain Gheerbrant's authoritative Dictionnaire des Symboles (translated into English by John Buchanan-Brown), the relevant entry notes that "Three is regarded universally as a fundamental number, expressive of an intellectual and spiritual order in God, the cosmos or mankind."

So even if CAS intended "The Mystical Number" as satire, focusing on rather mundane trios ("Three jugs of hard cider, / Under the seat of Farmer Hoskins' buggy"), there is nonetheless an undercurrent of the symbolic nature of that number, whether or not the reader considers three to have mystical properties.  "The Mystical Number" certainly does not rank with CAS' best work in verse, but it's interesting on a couple of levels, and rewards multiple readings.